Small 2 or 3 numbers wins at Euromillions

Most people aim to win big when they buy a ticket for Euromillions. Winning the jackpot is, of course, everybody’s dream. But let’s not forget the smaller prizes. These prizes will not make you rich, but they will allow you to buy some tickets for the next draw. After all, no matter how many times your numbers win, in order to cash in on a really big prize, it is important to stay in the game.

2 matching numbers on your Euromillions ticket

This is the lowest prize tier in the Euromillions lottery. Your chances of having 2 of the main numbers on your ticket are 1 in 22.
2 matching Euromillions numbers will, on average, pay around €3,00.

3 matching numbers on your Euromillions ticket

Expect to get paid approximately €10,00 when your ticket matches 3 of the Euromillions main numbers. The chance for 3 of your numbers to be drawn is at 1 in 314.

For the prize that you win when you match 3 main and 2 star numbers, you will be able to buy a considerable number of new tickets. On average, this will net you a prize of around €80,00. But the probability for this to happen is 1 in 14126.

And by the way, the odds of 5 plus 2 matching numbers are 1 in 139,838,160. So your chances for that jackpot are small, but in spite of that, the jackpot gets cracked every once in a while, so keep trying!

There is a total of 13 prize tiers, and the top tier is the jackpot. In order to crack the jackpot, you need all 5 main numbers and the two lucky star numbers correctly on your ticket. 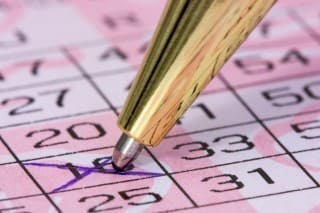 Second, there is the jackpot cap, which comes into effect when the main prize hits the €190 million mark. At this point, all the funds that would normally increase the jackpot even more, will go into the second prize tier. That makes the second prize tier (5 main and 1 lucky star number – probability of 1 in 6,991,908) a lot more attractive. And if the jackpot has still not been cracked after 4 draws for the capped amount, then it will be paid out to the next tier in which there is a winner (or winners).

Given the fact that often enough, no player matches 5 plus 1 number, you could win a share of the jackpot of €190 million with 5 matching numbers! And the odds for that win are a lot better, so this would definitely be a time when you really should buy some tickets!