About getting tickets for La Primitiva online

This is Spain’s biggest lottery. You may have also heard this lottery referred to as El Gordo, but technically that is not correct. El Gordo is the Christmas edition of the Spanish La Primitiva lottery, and it works in a totally different way. Check our article about El Gordo. 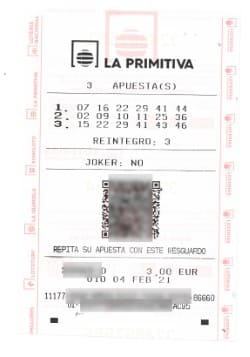 La Primitiva is the weekly Spanish lottery. The jackpot has a minimum amount of €5 million. But this jackpot has reached amounts close to €100 million in the past. The drawing takes place on every Sunday.

Although it was meant to be a national lottery, you too can now get tickets for La Primitiva online. You do not have to be a resident of Spain. Just pick your numbers on our site, then create an account with us and pay online. We will order a fully legal La Primitiva ticket for you.

To participate in the lottery you just need to purchase a lottery ticket with the numbers you have chosen. The La Primitiva lottery tickets contain numbers from 0-49. Players are allowed to pick any 6 numbers and after purchase a number from 0-9 is automatically assigned to that particular ticket. On the day of the draw, 6 numbers are randomly picked from 0-49 and 1 number from 0-9 so that any ticket whose number matches exactly with the numbers drawn wins the Jackpot.

The largest jackpot won so far in the La Primitiva lottery is the 17 October 2015 winning of a whooping €101.7 million jackpot. Prior to that the €73 million jackpot of February 2014 used to be the largest. Luck is definitely the major determinant in winning the ultimate jackpot as the probability of hitting the jackpot is 1:14 million, but considering the little stipend it cost to get a ticket and the huge sum you stand a chance to win, then everyone should feel lucky.