About the UK Lottery

The UK Lottery is the biggest national lottery in the UK, without counting pan-european lotteries such as Euromillions and Eurojackpot.

Nowadays, lotto players from outside the UK can have a shot at this popular lottery. The odds are better than in most other European lotteries.

The UK lottery just as the name implies is the official lottery of the United Kingdom. In 1994 when the game began, it was known as the National lottery but was changed to lotto in the year 2002. The UK lottery is franchised by the government of the United Kingdom and the license to operate the lottery was given to a group known as the Camelot group while regulatory operations of the lottery is done by the gambling commission. 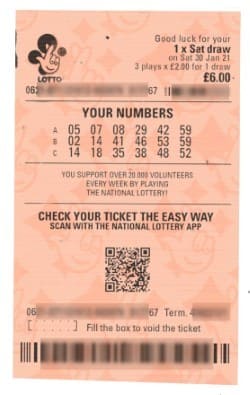 Only persons that are at least 16 years of age are allowed to participate in the UK lottery. Although tickets can be bought online from the National lottery website, it is only available to people who meet the above criteria.

To partake in the UK lotto, players need to purchase a lottery ticket and are allowed to chose 6 numbers from a choice of 59 and are also given the option of selecting a lucky dip in which the numbers are randomly selected for you. Draws are done twice a week where 6 numbers are selected at random and a bonus number also is selected from the remaining 53. If the numbers on your ticket are an exact match with the main 6 numbers drawn then you have won the jackpot. Even if your ticket does not match the whole 6 numbers drawn, you still stand a chance of winning something as there are prizes for matching 2, 3, 4 or 5 of the numbers drawn not excluding the bonus number.

The largest jackpot won so far in the UK lotto is the £161.6 million win of July 12 2011 by Collins Weir and his wife. The probability of hitting the jackpot in the UK lottery is 1:45 million.

Get your online ticket now for the UK Lottery!