The Monday and Wednesday Lotto is one of several lotteries played in Australia. Its early beginning started at new South Wales where it was its only game and was administered by the new South Wales lotteries. It had its first draw on the 5th of November 1979.

Up until 1994, it was the only lotto game played in the state before the introduction of the OZ lotto. The lotto has undergone several changes since it’s inception in 1979, but presently the Mon & Wed Lotto as it is now known as is played all across Australia.

To play in the lottery, you have to pick a minimum of 6 main numbers out of 45. During the draw 8 numbers are drawn at random, the first 6 numbers will form the winning numbers while the remaining 2 numbers are known as supplementary numbers and are used in determining the lesser winnings. Hitting the jackpot requires that your 6 numbers match the 6 numbers drawn during the draw. There are also prizes for tickets in which not all the numbers match the 6 main numbers drawn. 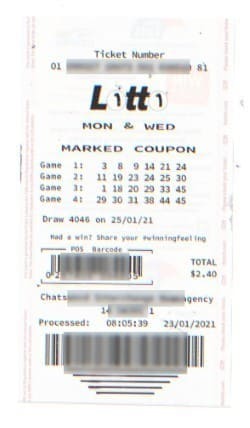 The Mon & Wed lottery offers a jackpot of about AUD$1 million which can be shared among a maximum of 4 winners. The probability of hitting the jackpot in this lottery is about 1 in 8 million.